In this question and answer video, we’ll take a look at the idea of following in the footsteps of successful artists.

Transcript of This Video:

Today I have a question from a jewelry artist named Melissa. And Melissa asks,

“There’s a really successful jewelry designer in my city. I see her jewelry selling everywhere. Would it be wrong to follow in her footsteps and do what she does so I can build my business faster?”

Well, here’s how I see this issue:

Because we see how well it’s working for them, and we’d like to have some of that success for ourselves.

But it never really works out that way.

Because we really can’t ever completely imitate someone else or be successful in the exact same ways that they are.

And here’s an example:

Oprah Winfrey is probably the most successful talk show host ever.

She rose to the top by doing her own things in her own ways.

Well, if I wanted to try to emulate her, I could try to copy everything she’s ever done, and do it in the same ways.

But I would never achieve the same things that she has.

And that’s because I am no Oprah Winfrey.

And at the same time, Oprah could never really imitate me.

Instead, she and I have each found our own type of success by doing our own thing in our own ways.

I know this was kind of a silly example, but I just wanted to illustrate how you can never really emulate somebody else and imitate the same success that they’ve achieved.

And I think even more important is that if you try to follow in somebody else’s success footsteps instead of forging your own path – there’s something that will never be created.

Because instead of doing YOUR thing, you were trying to do THEIR thing.

So if Oprah and I were both trying to be Oprah, there would be no Jewelry Making Journal – we wouldn’t be here today!

So, getting back to Melissa’s question:

Instead of trying to emulate and follow in the footsteps of the successful jewelry artist in your city, I would rather see you think of it as an affirmation that her success came because she’s doing her thing in her way.

And you should be able to achieve at least equal success by doing YOUR thing in YOUR way.

If anyone has any other feedback for Melissa (or about my response to her), I would love for you to share it below in a comment.

Thank you all for stopping in today, and I’ll see you soon!

The Jewelry Rena’s Wearing
in This Video: 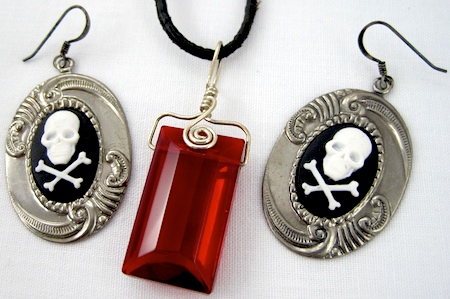