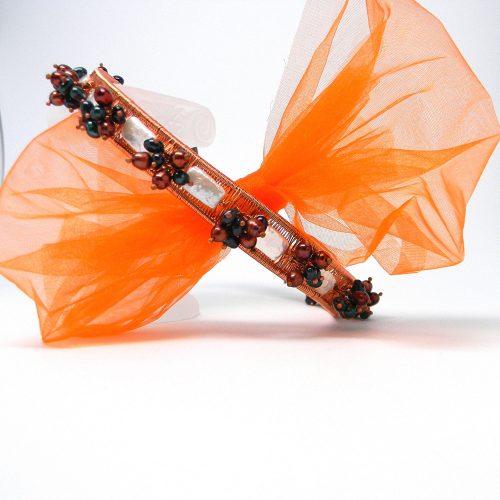 Sometime in 2016, I made a choker using pearls, gemstones and copper wire. It started off as something of a doodle born from a half-remembered dream and a desire to use up a chunk of supplies that had been gathering dust since I transitioned out of copper and into primarily sterling silver.

Even though the construction went well and I was happy with my technique, I rather disliked the resulting piece (which happens often when something I make doesn’t end up as I’d envisioned).

In my experience selling my jewelry since 2008, though I knew that often items like this will still appeal to someone out there. With this in mind I listed it in my ETSY shop anyway.

There have been quite a few inquiries about the piece, but none of the clients who have liked it so far have had the right size neck.

One client though, kept coming back to it and a few weeks ago wrote me to ask if I would be willing to do something similar using different gemstone colors. The client really liked the look of the copper but didn’t want to have to deal with it needing to be protectively coated every few months, nor did he want his giftee to have to deal with green marks on her skin. He also stated that neither he nor his lady liked the look of bright silver.

I suggested I do one up in heavily antiqued sterling so that the darkened silver would look black and provide a nice contrast for his desired the color scheme. 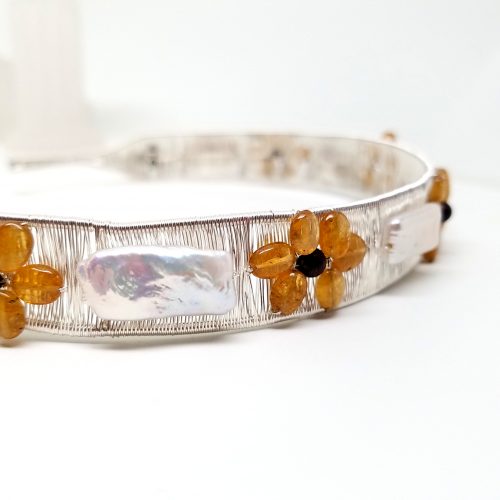 There are three photos for you here. The first is of the original choker. The second is the custom item in the client’s colors & theme but before the antiquing process, and the final picture is of the finished piece.

I used 18g half hard round sterling to build a framework on which to weave 28g sterling. The woven frame is the canvas for the yellow aquamarines, red apple jasper, and white biwa pearls. I am quite pleased with the results. Thankfully, so is my client. 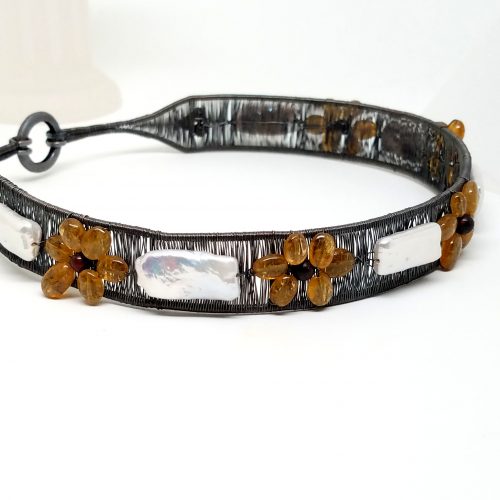 Once again, I find that being in love with something I’ve made isn’t a requirement for it to be a saleable item, or for it to inspire a customer to dream up a challenge for me. The only items I scrap out these days are ones where the construction simply isn’t of sufficient quality to make it saleable. Or pieces where a mistake I’ve made is so egregious it cannot be masked by making design changes to incorporate the error.