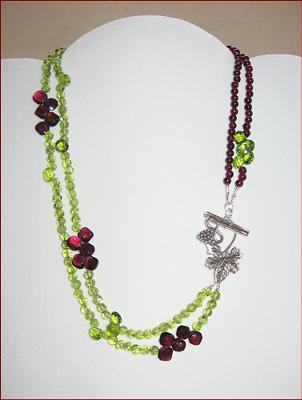 It took me a while to summon up the courage to actually make this piece but I was pleased with the result.

I named it after a local vineyard and thought it might sell locally. It has been on display in a cabinet in a local store for a while now. Before that I had it on my website. 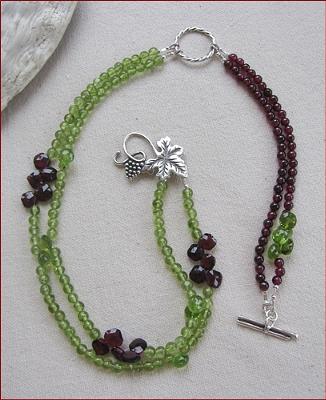 I’m wondering if it just isn’t the kind of thing that people actually wear.

It’s more expensive than most of my other pieces – it is made from garnet and peridot – rounds and briolettes of each – with Bali sterling silver.

I’d love to know what everyone here thinks, or whether I should take it apart and create something simpler but more wearable.

Personally, I *don’t* think you should take it apart to make something else.

It’s a very unique and lovely necklace – and I think this necklace just hasn’t yet gotten in front of its most likely buyers.

In my opinion, it’s definitely a necklace that some people would be very interested in wearing.

It’s possible that it just needs more exposure to customers who are willing to spend more.

I don’t know anything about the local shop where it was displayed, but that may not have been a place where your necklace was seen by very many people.

If I were in your shoes, I wouldn’t give up on this piece. Instead, I’d try to increase its visibility – especially with the Holiday season coming up! :o)

Thanks for sharing this lovely necklace with us!

Please do not take this beautiful necklace apart. It is so up to the minute with the asymetrical look. The peridot and garnet are bang on taget too. The clasp is a real beauty.
Hand in there with this special one.

Thank you
by: Didy

Thank you – you have given me a boost!

Now it’s just a matter of finding the buyer…

don’t change a thing
by: Kim aka The Chic Peach

I really like this necklace and wouldn’t change a thing. Have also had pieces that took a long time to sell. Think of it this way; the right person just hasn’t seen it. I’ve made pieces and had the same thoughts and someone comes along and purchases them. It makes me smile when they say, “This is so me!”.

Don’t give up!
by: kathleen

I agree with everyone, save it. I have had a few pieces that really sat for some time and then BANG they flew out. I’m still in shock. I was about to take apart and redo. Give it more time, it’s lovely.

It is lovely!
by: Suzie

The right person will come along!

Keep it!
by: Sharon

I love this color combination and the design is great! I’ve found that sometimes it just takes a long, long time to sell a particular piece on my website. Many times, I’ve decided it’s time to take it off and redesign, only to have it sell. Have faith in your work, it’s beautiful!

A Little Patience…
by:

One of the first pieces I ever made for sale was a beautiful amethyst beaded necklace with a lovely fluorite rose pendant. At one of my early shows, a gentleman returned to my table twice trying to buy it for his wife, but at a bargain price that he wanted to pay, not the price that was marked. I smiled but politely refused. He ended up not purchasing it. After that, it seemed no one wanted that piece! I contemplated taking it apart, marking it down in price, etc. but my show partner (also a jeweler) told me not to worry — the right person would come along eventually. Well, let me tell you that I had that piece for several show seasons with no bites whatsoever. It became the “joke” necklace we would laugh about at each show as we took it out and placed it on the table. Then one day, we were selling at a charity holiday show. It was like a feeding frenzy at our table. I sold a good chunk of my inventory that day; people were buying up everything. At one point, two women spotted “the” necklace and almost began fighting over it and kept talking about what a “find” it was. Of course, one of them snapped it up. My partner and I almost could not contain our laughter, knowing the necklace’s “history.” It was a great lesson in exercising patience! Good luck!

Thank you again!
by: Didy

Thanks so much for your encouragement! I’ll keep it as it is.

I’ll take the necklace to a show I’m doing this weekend and I’ll be prepared to wait a while until its rightful owner decides to buy it.

Long for a feeding frenzy at my table too!

Why not go to the winery and show the owners? Perhaps they would display it in a glass case in their showroom with a bottle of their premium wine, and drape the necklace coming out of a crystal wine goblet. I bet if you made matching earrings, they would sell the set immediately for you. Or buy the right to use it in their Christmas advertising or maybe they do a lot of business with wedding parties and corporate events. Maybe working with them, you could make several different colour variations to go with their different wines (blush/roses, whites, reds).

It is a beautiful, beautiful piece of work.

keep it
by: Stormflight Designs

My neighbor is an apple green fan and would want it if she saw it! I say keep it. But, I know the urge to change because I have several pieces that I am thinking of re-doing as well. So, in some ways, its good to keep things fresh. If you do re-do it, keep the photos! You know that as soon as you take it apart, someone will be asking for it!

NOOOO!!!
by: destiny by design

the minute i saw the picture, my whole being shouted NOOO!! definately keep it as is…someone will fall in love with that stunning necklace and treasure it! like the idea about taking it to the winery….they may display it, or even buy it!

Have Patience
by: Elsie

I know I am just repeating what everyone has said thus far, but do keep it. I know how tempting it is to break and reuse beads from unsold items but unless you are desperate to reuse the components, definately keep the piece as is as there is definately someone who will want this piece. It has happened to me many times when I thought something would never sell, but then, lo an behold someone sees it, loves it and wants it. I think my record for a piece like that is 4 years but I was so gratified that I resisted the urge to disassemble the piece.

Thanks again for all your kind words and encouragement.

I will definitely contact the winery as they hold a summer fete of their own each year and I’ll ask to be put on the list for next year.

I was hoping to be able to report that the piece had sold after a 3-day fair I did at the weekend -I had it on display. It was admired though and I will continue to display it at the next few fairs I am doing.

Hope it won’t take 4 years to sell though!