This is a photo pendant that I made to wear to my cousin’s memorial service. 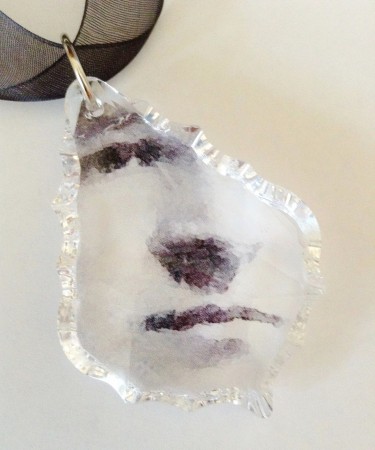 This is my finished photo pendant, created to honor the memory of my cousin.

She died tragically and way too young. I wanted to wear something that symbolized our family. I found a photograph of the first matriarch of our family, my great aunt, Tante Anna, or as we called her “Tati”.

She, along with her sister (my Grandma) came to America from Germany in 1923. 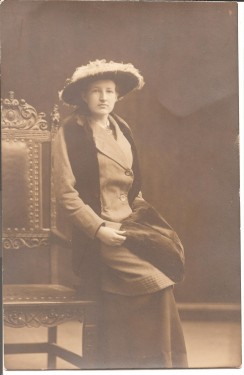 This is the photograph of my Tante Anna that I cropped to use on my photo pendant.

They came here to find jobs in order to send money and food back to their parents and brothers because after WWI, Germany was very much a devastated country.

They were the first of their family to come to America. They did not know the language and they did not know a single person, but they were courageous and strong women who forged a new life for themselves.

I made this pendant to honor them and also to honor the memory my young cousin who was an artist.

I used a chandelier crystal and placed the cropped photo of Tati’s face behind it.

Then I coated the back with epoxy resin to protect it, and I added a jump ring and a ribbon.

I keep the pendant in a special drawer which is filled with prayer cards, photographs of people I love, and other memories.