Giving Shells Back Their Pearls 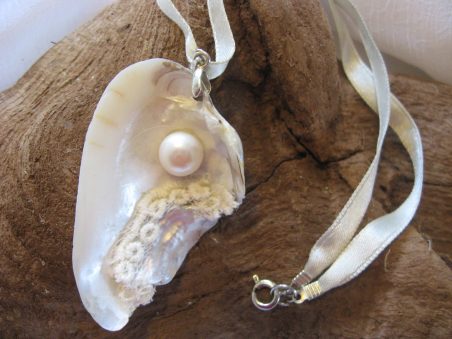 I was going through my shells the other evening, and picked out a few that had holes in them, to see what I could do with them.

I wanted to embellish the shells somehow, and as I looked at the beautiful colour and texture of the shells, I felt that I wanted to use pearls, to keep the softness and harmony.

Then I had the thought that it was kind of like giving the shells back their pearls. 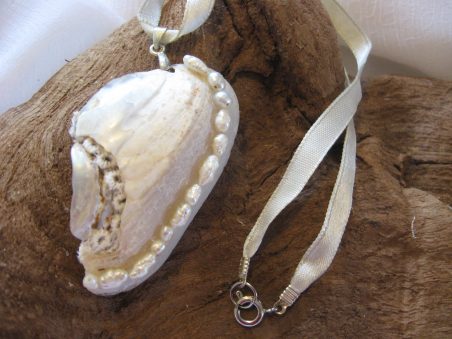 Of course, not every shell contains a pearl, but I liked the idea of honouring the shell by embellishing it with something that normally would be taken away from it, with the shell cast aside, especially an imperfect shell.

For my first necklace, I adorned it with freshwater pearls.

I had a large pearl that came from a pendant I had in the past.

It was flat on the back, and nestled beautifully into the hollow of the shell.

On the other side, I followed the texture of the shell with a line of small freshwater pearls. 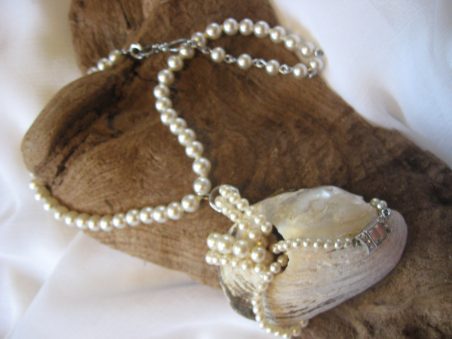 I decided to add a piece of shell and a bit of ivory lace edging as well, to fill the pendant out a bit.

The neat thing is that this necklace is reversible.

It can be worn with either side facing out, depending on which pearls you want to show. I loved the soft ivory satin ribbon with this pendant.

The second shell had a large hole in the middle of it.

I wanted to wind something through it.

I have a few strands of vintage pearls that I don’t tend to wear, because I prefer the more boho look of freshwater pearls.

I experimented with using those, and really liked the effect.

The clasp is really pretty, so I attached it in a place where it could be seen, for a bit of bling.

At first I thought that hanging the pendant from another pearl strand would be too much, even though the pearls are basically the same colour, but as I tried other options, nothing looked right.

When I went back to the pearl strand, I knew it was the right thing to use.

The necklace has a really eye-catching look to it, kind of “beach glam”! 😀 .

And it’s a way of being able to use traditional vintage pearls in a different way.