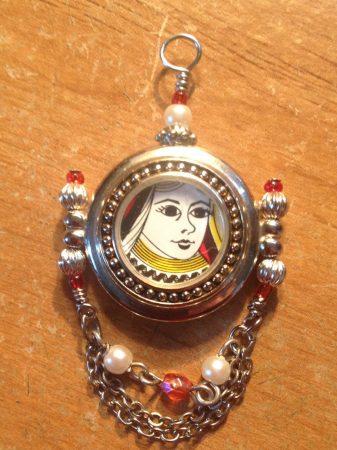 I thought I would share this fun way to repurpose an old wrist watch.

I love to repurpose things and I came up with this idea for an old watch.

First I removed the band and popped the back off and took out the works including the winding stem on the side.

Then I got an old deck of playing cards and traced around the queen, cut to fit snugly inside the case.

Next I strung some decorative beads on a wire and added a loop to hang it.

I placed the long end of wire in the hole where the stem was and made a loop on the end inside the case, nice and snug so it won’t come loose and i added a drop of E600 glue to make sure it stayed in place.

Pop the back on and added some more beads and chain and tada! It makes a pretty pendant.

I’m going to add some beads and chain to make a necklace.

You can do this with just about any watch as long as the watch case has holes where it attaches to the band and not a bar.