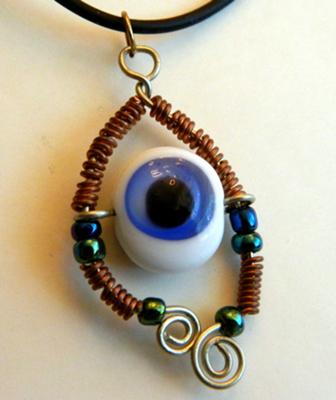 Yes yes I know but this is not the Egyptian eye of Horus, it is the very British very Victorian Eye of Horace…to be specific the eye of one Lord Horace Gribble a very important British explorer. You have never heard of him? Oh well, while he was a very avid explorer he tended to get to all the right explorer type places Egypt,Antarctica, the Congo just a tad to late to be the first one there.

Now back to the story of the eye of Horus. You see he was not just an explorer but he was quite the practical joker. When in Africa exploring the Congo he thought it was “a quite ripping good time” to take out his glass eye and scare the local natives with it. How did he lose his eye you ask? Well it was in his youth and it started with fireworks and the phrase “Cheerio old chaps watch this” the modern equivalent would be “Dudes check this out” I think and that phrase never ends well when fireworks are involved.

Anyhow he was chasing the natives around one day with his glass eye and one of the chiefs decided it must have mystical powers and asked his biggest warrior to snatch it away for him offering him five cows a goat and his not nearly that ugly third daughter in return.

Well since the warrior somehow was under the impression that they eye itself was attached to the end of Lord gribbles fingers he managed to extract the tip one of those in the process. This digit is now said to be in a reliquary named “The Gribble Finger of Death”.

The eye was made into an amulet and has the power to protect one against certain people. It really only repels those unobservant cow like folk that ask endless stupid questions and don’t really pay attention to the answer so they can once again ask the same question without feeling the slightest shame whatsoever. It works equally well to repel the undead as well as merely brain dead I am told.

Since that time amulets have been made in the same style that work equally well as dullard repellents in both the office and after hour settings. Worth a try anyway isn’t it?…LOL. Each amulet comes with a story of its origins and a certificate of almost authenticity. This necklace/amulet is made of glass (lamp work) wrapped in silver and copper and has a 16 inch cord with a sterling clasp.

Very fun jewelry, and I loved your story – and the name of your piece!

LOVE the story… what a great idea! I hope writing books (cautionary tales for kids, for example) is in your future.

Love it!
by: Annette

Hahaha! Thank you for sharing this wonderful story of historical inspiration to this great piece! It’s good to know that your work comes with a Certificate of Almost Authenticity too! LOL!