A dear friend recently asked me to restring and modernize a double strand of German crystal black jet beads that had belonged to her Grandmother. 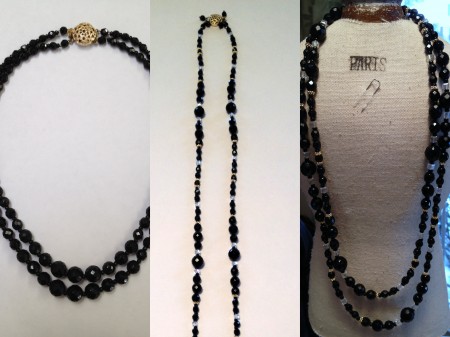 What a pleasure this project turned out to be! I was able to work with some beautiful vintage beads, learn more about German / Czech bead manufacturing after World War II, and create something new and meaningful for my friend.

My friend is German and married to an American Army officer. The original necklace was in amazing condition and I estimate it was from the late 1950’s to the early 1960’s. I have always concentrated on Czech beads and knew very little about the German bead history. I enjoyed learning about this part of my craft and am encouraged to seek out vintage German beads in the future. I really liked that this project had vintage German beads kept in a German family that made their way to America via marriage. It represented the Old and New so well.

My friend asked that this old fashioned double strand choker style necklace be converted to one long strand so that she had the flexibility to wear it long or double it. We added square crystals for a modern look, and a dash of gold and silver to cheer on West Point as her husband and son both graduated from there. We kept the original clasp, which had such charm. 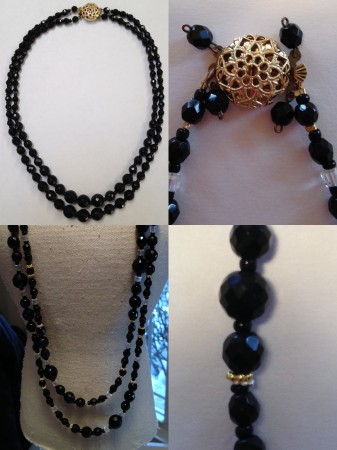 My friend was thrilled with the results of the remodel. She can now wear these beautiful crystals of her Grandmothers in a modern way, reflecting both the familial history of her German heritage and her married history of West Point. They will be a new heirloom for her grown children representing their combined heritage.